The Gram-Schmidt process is typically presented as a process for orthonormalizing the columns of a matrix. Let

be an m x n matrix with each row being a sample and each column a feature. Further, define

as the transformed matrix and

as the i-th column of a matrix

. Using this notation, the orthonormalized matrix

is the projection of u onto v, and

denotes the inner product of these vectors

The Gram-Schmidt process accomplishes orthonormalization when the dot product is used as the inner-product. Recall that the dot-product of two vectors is defined as:

If the dot product of two vectors x and y is 0, then the vectors are orthogonal to each-other. This implies that the angle between the two vectors is 90°. After performing the Gram-Schmidt process, the inner-product of any pair of columns in the transformed matrix is 0. Thus, the resulting matrix is orthogonal.

as the covariance of the vectors x and y. The above definition is used for convenience despite being more inefficient than the typical definition using the vector means.

In order for an operator to be defined as an inner product, it must satisfy four criteria.

Unfortunately, this fourth condition is only partially true. The covariance of any constant vector is 0 and so the vector being 0 is a sufficient but not a necessary condition. Thus, covariance is positive semi-definite and not positive-definite as required.

By carefully restricting the subspace of vectors, this condition can be made true in the reduced space. If the features are assumed to have mean 0, this condition holds. Intuitively, any constant vector that is mean centered becomes the 0 vector.

Since it is assumed that the vectors are centered, only centered vectors must be used throughout the Gram-Schmidt process. A short proof follows which shows that all vectors produced in the intermediate steps of the process are centered.

is centered. The proof proceeds using mathematical induction. Using the definition of 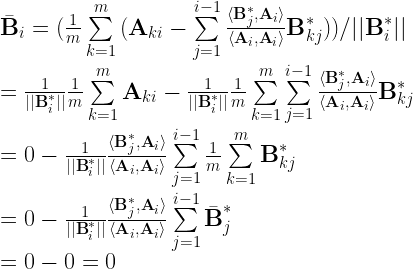 indicates the mean of column

.In the final step, the induction hypothesis, that

, is used. Thus, if the data matrix is centered, the Gram-Schmidt process only operates on centered vectors; the assumption remains valid throughout the process.

To proceed, the data matrix

is standardized. This fulfills the condition required above and causes the covariance of columns in the standardized matrix to be equal to the correlation. Recall that covariance is defined as

is the standard deviation of x. Thus, the correlation and covariance are equal, since the standardized columns have variance one.

An example is presented using the automobile MPG dataset available from UCI. The dataset is used to train a model which can predict city-cycle fuel economy given several numerical and categorical features. Only the numerical features are considered here.

The correlation between the variables can easily be computed using pandas: A.corr(). The resulting correlation matrix shown in Table 1.

of a linear regression model fit to the data is 0.7007. Next the method described above is implemented and the data matrix is transformed.

. The above are both due to the columns having no linear correlation to each other.

As can be seen in Table 3, the sum of the

values for the original features is inflated as some variables explain the same variation in MPG.

is the multivariate intercept,

is the i-th univariate regression coefficient,

is the number of columns in the data matrix, and

is the mean target value.

Principal component analysis also produces an uncorrelated transformed matrix. However, due to the nature of the transform, it is difficult to interpret the projected vectors. The aim of this post is to present a method that can be used to decorrelate a data matrix suffering from multicollinearity in a way that is more transparent. In this case, a transformed column has had all portions that are linearly correlated to the previous columns removed.

As seen in the example provided, this method does not improve the

of the model. Instead, the method is presented as a way of aiding the introspection of linear models on highly collinear data sets.